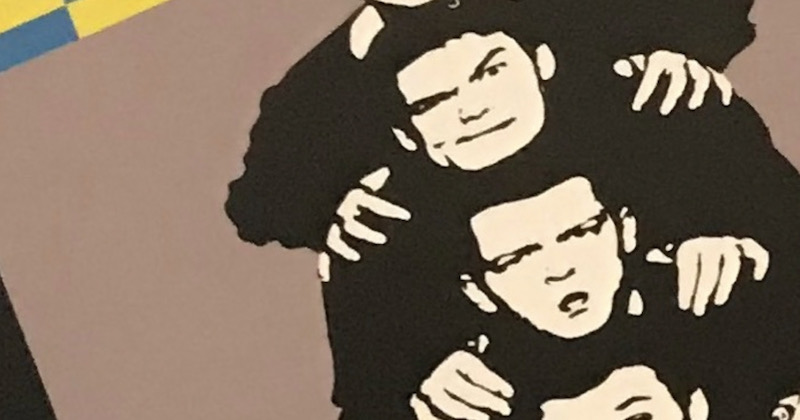 It was always hoped that the launch of the Facebook group “Completist Madness” six months ago, would unearth some fascinating never previously seen vintage Madness treasures. Completist has so far certainly succeeded in its aim but to my mind, the most important discovery so far is one that has potentially existed under our very noses, largely un-noticed, for the past 41 years; a 4 track 45rpm 7” jukebox edition. 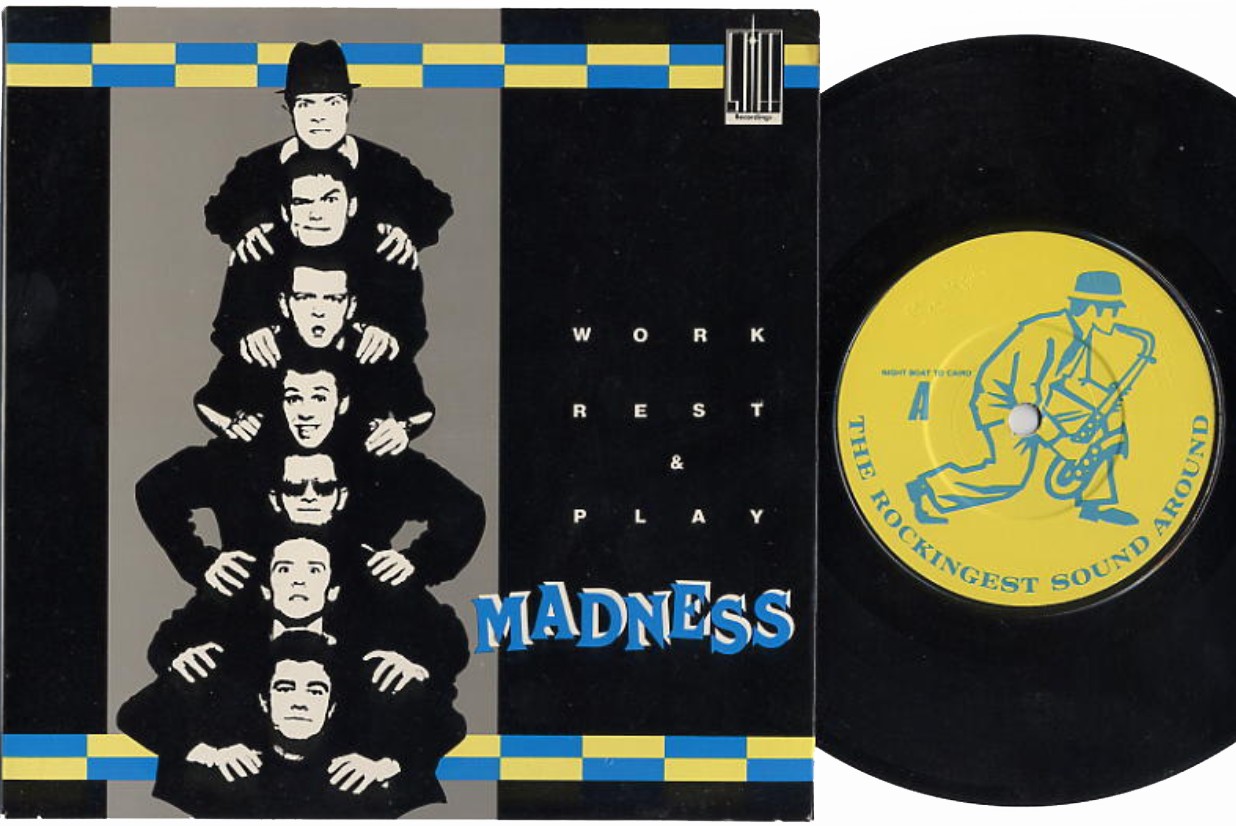 Following this recent discovery, here are the eight known key pressings of UK 1980 editions of Work, Rest and Play (in addition to the two main white versus blue picture sleeve variations):

What follows is a complex tale of the pressing of this 7” record, it has the potential to be confusing so I will try to make this write up as straightforward as possible. I will start from the beginning, I will use all the facts that are available and were not available I will make the most obvious assumptions.

Madness’s 3rd single for Stiff Records, released in the form of an EP. It was not, as some have suggested in recent years, intended as a mini-album follow up to One Step Beyond, but merely a single with a couple of extra tracks and it was promoted as such (the press releases for it are clear proof of this).

EP’s were typically pressed to play at 33rpm. This was to be released in the UK as a 7”. It could have been produced at 45rpm but we have to make assumptions as to why it wasn’t. Squeezing 4 tracks onto a 7” isn’t impossible but a narrow groove reduces sound quality and increases the chance of the needle jumping. Or maybe it was just done for novelty value or as a nod to EPs of the past.

For whatever reason 33rpm was chosen. An acetate (lacquer disc) would have been cut from which the first set of silver/nickel pressing plates (stampers) were prepared (A1 and B1), the artwork for the labels was finalised and the 7” was pressed. However it would seem that someone supplied the lacquer cutter with the wrong master tape! Instead of the 7” produced from stamper A1 playing the standard version of Night Boat to Cairo it played a “Rough Edit” version recorded and mixed with additional organ and from a date prior to the strings being added. It is somewhat astonishing that no one had listened to the acetate before the stampers were made, nor that a handful of white label test pressings were circulated. Perhaps it had been listened to but by the wrong set of ears! Whatever happened ultimately the right set of ears clearly listened to the finished product (perhaps one of the band) and needless to say production was halted. A few examples of the UK A1 / B1 pressings that play the “Rough Edit” version of Night Boat survive but are extremely rare.

Following on from this initial glitch, the master tape confusion was addressed and a series of stampers were produced, all playing the correct tracks. For the A-side, these were stampers A4, A5, A6 and A7 and for the B side B2, B3 and B4. It’s anyone’s guess what happened to A2 and A3, perhaps in error they had also been cut with the “Rough Edit” version. All standard 33rpm Work, Rest and Play 7”s were therefore pressed using stamper A4, A5, A6 or A7 on the A-side and B2, B3 or B4 on the B side. If you find one which shows numbers other than these it may be quite valuable. Those pressed with the stamper combinations of A4 / B4 and A5 / B4 were produced in translucent ruby/red vinyl, visible when held in front of bright light. 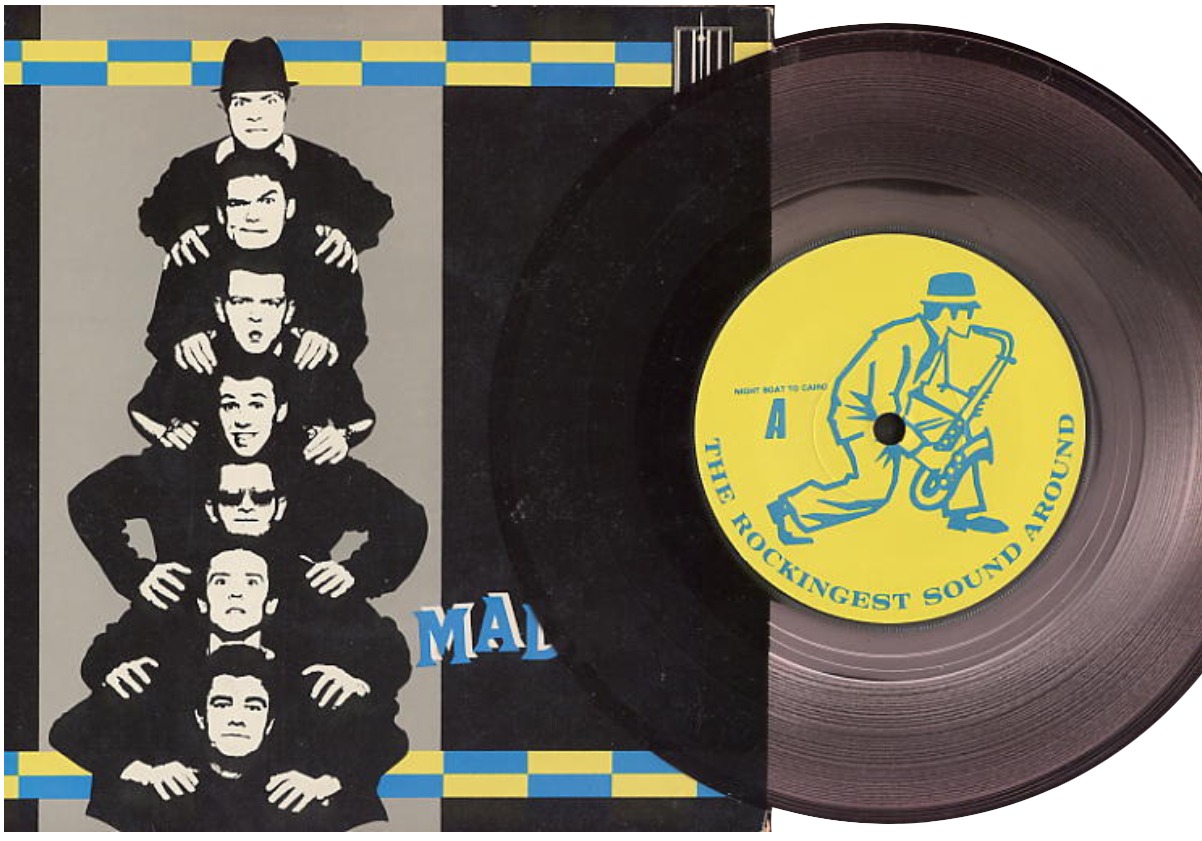 There are a few minor variations in the printing of the sleeves relating to the print colour and the application of the glossy finish. One very notable difference is that whilst the majority on the front of the sleeve had Madness in blue printed on a white background a smaller number had Madness in white printed on a blue background. The style of printing of these two sleeves is also notably different, it is likely they were printed by different companies. The less common sleeve with Madness written in white is laminated on the front, an identical printing process that was done for the less common Absolutely sleeves, presumably the same printer. It’s curious that the same printer seems to have been responsible for the alternative Work, Rest & Play sleeves as well as for the alternative Absolutely sleeves. 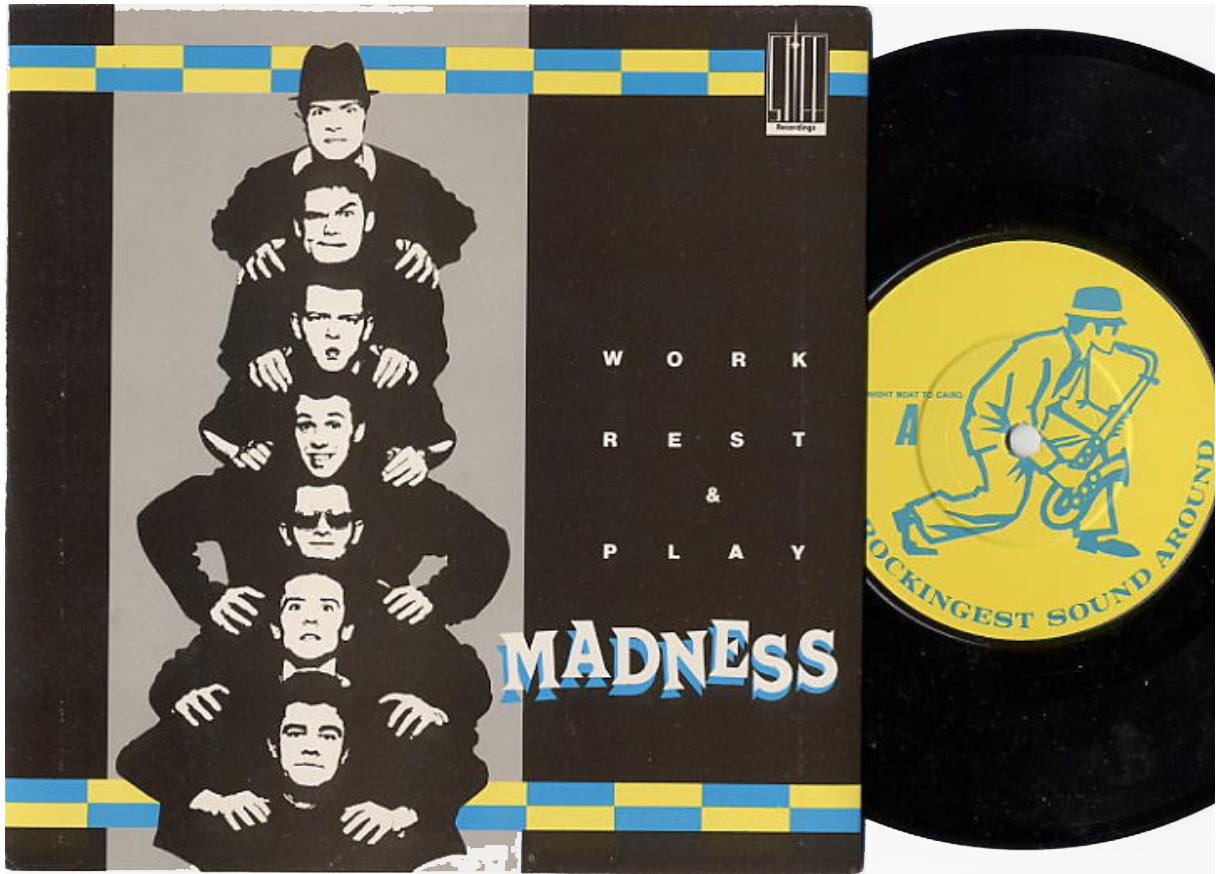 I now return to stampers A1 and B1 that had commenced production of the initial pressing of the 7” prior to the discovery of the “Rough Edit” version having been used. Stampers are designed to press about 100,000 records each before needing replacing. Stiff was renowned for not letting things go to waste (i.e. their unsold Madness records were never destroyed) so stampers A1 and B1 miraculously found a new home…the very same faulty stampers were used to press all of the Portuguese 7”s! This may have been done in the UK pressing plant or perhaps the stampers were sent to a pressing plant on the continent. For the purposes of the record-buying public in Portugal, the version of Night Boat that they would have heard on the radio in 1980 and purchased as a 7” in the shops was not the version they would have known from the One Step Beyond LP but the “Rough Edit” version! They were sold a pup! 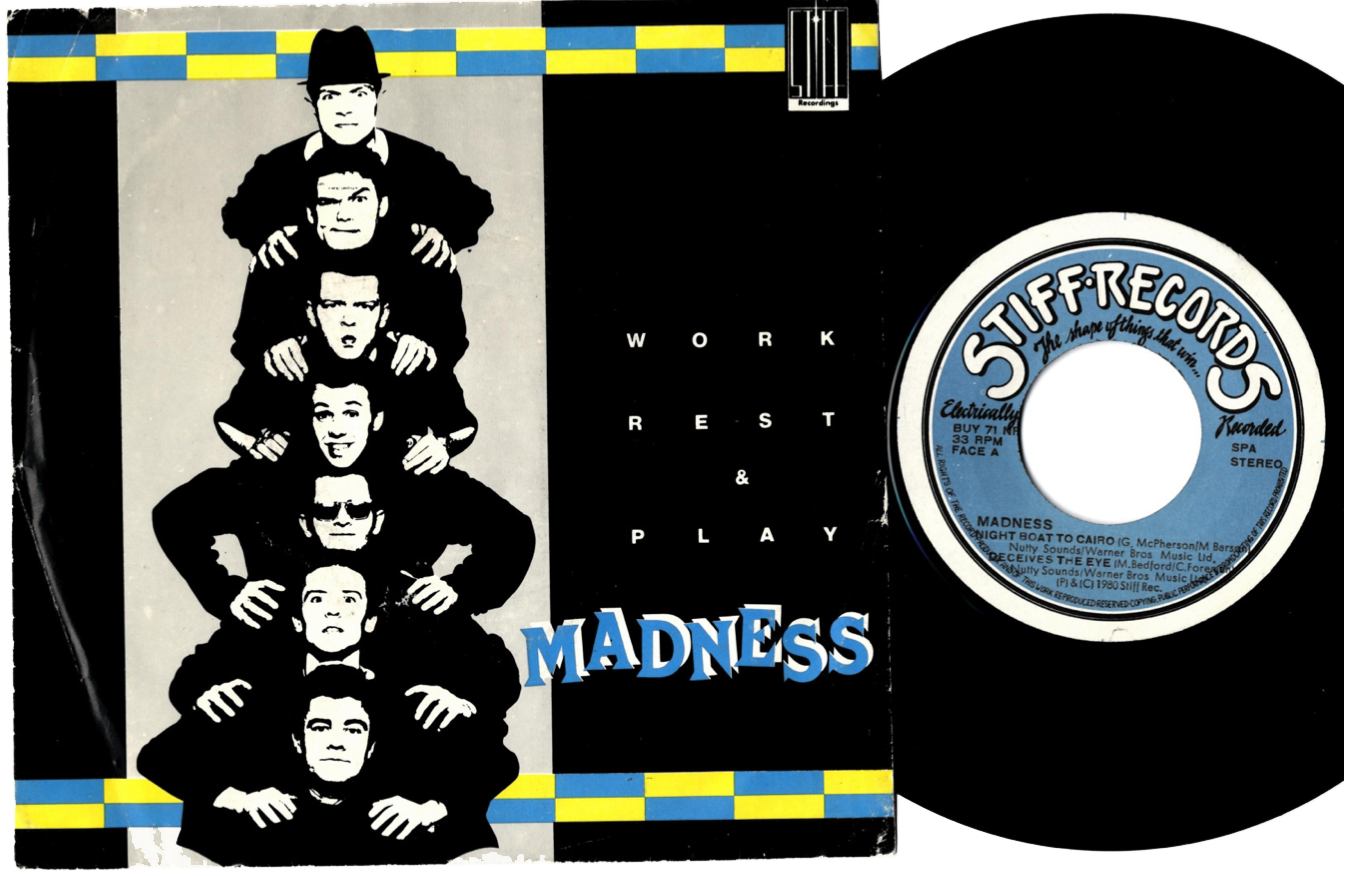 When bands spot errors in releases it’s not unknown for record companies to cover their tracks, yet minimise waste, by sending the faulty goods abroad. The misprinted “Bed & Breakfast” sleeves for the UK One Step Beyond Stiff LP ended up going to the Netherlands to be used for the Dutch release and the misprinted booklets for the Dangermen CD, where the brass section hadn’t been credited, ended up crossing the channel for the French release!

Returning to Work, Rest and Play, a promo edition was needed as DJs would not be best pleased to stick the latest offering from Madness on the turntable only to end up with the distorted sound of a 33rpm record playing on their 45rpm decks. So a 2 track DJ promo was produced at 45 rpm, matrix numbers “BUY DJ 71 A4” and “BUY-71-B1-DJ”.

Not only was a 45rpm edition needed to keep the UK’s DJs happy but the UK’s jukeboxes were generally only programmed to play at 45rpm as well. It was no good simply dinking the standard version, as had been done for previous Madness singles, a special jukebox edition would be required. It seems they initially decided to make a version to play all 4 tracks in jukeboxes at 45rpm. An acetate and stampers were produced for this very purpose and carried the matrix numbers “BUY 71 JB A-4” and “BUY 71 JB B-1”. However, it seems this idea didn’t proceed, presumably because there was concern at jukebox customers paying for 1 track and getting to hear 2! So it would appear that plan was abandoned but instead of paying for a further set of acetates and stampers to be produced, they decided instead to simply recycle the stampers they had already made for the DJ promo. Very similar labels were printed, except showing a catalogue number of BUY-JB 71 but with vinyl that had a matrix number from the DJ promo stampers of “BUY DJ 71 A4” and “BUY-71-B1-DJ”!

To confuse matters further, somehow the stampers which had been made but abandoned bearing a JB matrix ended up getting used to press a few of what was ultimately intended to be a 2 track, not 4 track jukebox edition. So a handful of jukebox pressings exist with the 2 track JB labels and 4 track JB etched vinyl. It is understandable how a technician in the pressing plant could have easily got confused and assumed that stampers with a JB matrix should be used with JB labels! Owing to the scarcity of this item presumably the error was spotted fairly early on and the stampers switched to the 2 track DJ versions.

This concludes the story of the complications and manufacturing errors arising from the UK pressing of the Work Rest & Play EP.
For completeness, copied below are pictures of the final two 1980 Work Rest & Play UK 7” collector’s items referred to in my list of 8 items at the top of this report.

NuttySounds is always updating our Madness inventory and selecting releases from the past 40+ years from all corners of the world with some of the best available items in the marketplace.

Read all about it…

A single chord reminiscent of The Beatles' A Hard Day's Night' and pursued by some evocative piano from Barson evolving into an East End pub...

END_OF_DOCUMENT_TOKEN_TO_BE_REPLACED 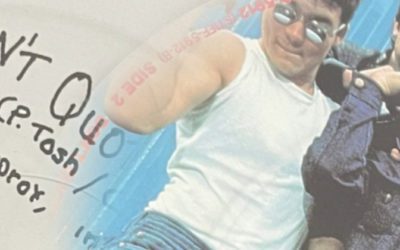 Don’t Quote Me On That

Let me take you back to the early 1980s, a time when there were three known versions of "Don't Quote Me On That"; at least to me, that is. I am not...